Happy Birthday to Me

My birthday was yesterday, and I celebrated by having a great time all day!
In the morning I knit and puttered around.
In the afternoon my sister and I went to the Rising Meadow Farm Fest.
Last night my husband, my father, and my son all took me out for supper at Merlion, a restaurant specializing in food from Singapore.

Today I’m worn out and headachy. Maybe it’s the wine I drank last night. Maybe it’s that I stayed up till midnight every night this week, what with entrelac, politics, and hurricane Ike. The entrelac is finally looking good – picture to follow soon.

Part Two – In which Mom explains why she has made an unenforceable rule.

“Suzy, you don’t have permission to have sex before you’re eighteen.”
What?  Yes, I know I can’t follow you around.  I can’t possibly enforce this rule.  But, I can still tell you what the rule is, and if you have sex when you’re 15, you’ll know you’re breaking the rule and doing something you do not have permission to do.

Why? Because you aren’t ready.

First, there are the well-known physical dangers.  I know they’ve talked to you in school about std’s and about pregnancy.  And there’s a lot of talk about condoms, as if they were a magic answer.  Well, the truth is the “barrier” methods of birth control are great for a married couple who are going to have kids anyway, and it isn’t the end of the world if they start their family a little sooner than planned.
But for kids?  There is a big failure rate for condoms, because kids are more likely to skip it “just this once” or – this is the biggest problem – put the condom on too late.  One little drop is all it takes for a baby to get started.
And then what?  The choice between an abortion or becoming a mother at 16 is not a happy thing to face.  Even if you end up sure it was right to have an abortion, or sure that you love being a young mother, there are some real difficulties with either one.  It’s a whole lot better not to be in that position.

Secondly, even if there was no such thing as a baby or an std, young teens aren’t emotionally ready for a sexual relationship.  It’s just – Suzy, I know this sounds goofy, but it’s true – it’s not as much fun as dating lots of guys more casually.  Think about it – the kids who have sex are in these monogamous relationships, lots of jealousy and only dating each other – that’s marriage not dating.
This is the stage where you try out romantic dating with lots of different boys.  You just can’t do that if you’re having sex with someone.   And, even if you were ready, chances are the boy isn’t mature enough.

When you’re a young woman in college, you will be emotionally and physically grown up enough to have a pretty good idea what kind of man you like, and to be ready for more serious relationships.  But, not until then.

Posted in The Outside World

Talking with Teens About Sex, Part One

For several days, in light of the disclosure that Sarah Palin’s 17 year old daughter is expecting a baby, the airwaves and print media have been full of chatter about the great difficulty of “talking to teenagers about sex.”  Apparently, there is a lot of hand-wringing and much concern about “sending the wrong message” to kids.  Some folks don’t want to “send a message” that sex before marriage is ever okay, others are worried about kids not having information about birth control.  Etc., etc., blah, blah, blah.

So, just in case it might help anyone, here is how I talked to my daughter (referred to in these posts as ‘Suzy’ even though that isn’t her name) about sex.  It’s a (add slightly sarcastic voice here) really novel concept (end sarcastic voice) – I tried to tell her – gasp! – the truth, as I know it.  The truth as my life experience has led me to believe it exists.  Your mileage may vary.

Part One – in which mom gives daughter a blueprint for love and marriage.
My speech went something like this:

“Suzy, it’s a wonderful thing to be in love with a man you respect and enjoy, and being married to the right man is one of life’s great joys.  But how do you know which type of person is right for you?  This is a gradual process that starts when you’re a child.   You know that elementary school kids mostly play with their own sex, like on the playground most boys are playing with other boys and girls with girls.
What’s that?
No, that isn’t the same as being gay.  That’s a whole different thing we can talk about later, if you want.
Anyway, it’s good to also have friends who are the other sex, in other words it’s great that you and Ben have been friends so long, and that you think Grady is funny and all that.
This stage is where you just generally start noticing what kind of person you like to be friends with.

The next stage is around middle school, when boys and girls start spending more time together and are interested in who “likes” who and who is “going with” who, and who is asking who to the dance, and all that.   Kids still have friends of the opposite sex, but this is different – it’s romantic and might include wanting to kiss the person and all that stuff.   Okay.  Fine.  In middle school, it’s okay to do things with boys and girls both, in groups.  Not dates all by yourself, but skating parties, that kind of thing.  Or, I’ll drive you and whoever to a movie and pick you up when it’s over.
This stage is part of discovering what boys you find attractive, what’s important to you in a boyfriend, who is nice and trustworthy, who’s boring or mean, who you think is cute.  All that.

Stage three is in high school.  By now, if you’ve had boys who are friends, and done some of the note-passing and school dance middle-school stuff, you’re ready for real dating – you and a boy out doing something.  You can be romantic, even physical, but remember what I said – You don’t have permission to have sex before you’re eighteen.
Why?
Simple answer, you aren’t old enough.

Part Two will be Pregnancy and Finding Your True Love.

If I have to listen to one more media type seriously and respectfully discussing Sarah Palin’s “qualifications” for office, as though there were any remote way on earth she has the intelligence, education, skills, or background to be even a cabinet member, I will just scream.

Sarah Palin is lamentably ignorant, narrow-minded, uneducated, small-minded, and lacks ANY experience in the kinds of thinking, analyzing, compromising, or big-picture seeing that a president or vice president does.
Let’s put aside (although it’s hard), the lies and misrepresentations in her speech, her ethical lapses in Alaska, all the family & baby dramas, and let’s even set aside (although it’s hard), her extreme right wing views on so-called “social” issues.
Putting all that away, the real problem is that there is NO indication that she has ever taken even a passing interest in foreign affairs or international relations, or has EVER engaged in thoughtful study of economic  policy, environmental science, globalization of labor and production, the social dynamics of largely Muslim countries, climate change, constitutional law, the role of the judiciary in our society, financial markets, the structure of our tax code, health care, space travel, infrastructure repair, educational issues, effective consensus building (she’s been a bully in Alaska), or any of the other issues that the next president & vice president will have to deal with.  Does she even speak a foreign language?
Honest-to-Pete, I could care less who is more “down to earth” or who has a “story” I can “relate to.”  Haven’t we learned anything from eight years of a president chosen on the basis of who would be more fun to have a beer with?
What is “elite” anyway, besides the newest insult?  If elite means more intelligent, better educated, more practiced and adept at analysis of complex multi-faceted issues, better spoken, better able to interact appropriately with world leaders, possessed of a greater fund of general cultural knowledge, and being the Law Review editor of Harvard – then, yeah, I want the elite one.  Field-dressing a moose, watching kids’ hockey games, firing state officials who won’t fire your sister’s ex-husband – these are neither the things the president does, nor are they preparation for being vice-president.  It’s not who has more “executive” experience, or who is the best speaker, whose family is the most engaging, or who is “just like us.”  Leading the free world – damn right, I want someone in the top percentile of everything.
Far as I can tell, Palin was overmatched as mayor of Smallville, Alaska.  I shudder to think of her with potential responsibility for the whole country.

Posted in The Outside World, The Porch Swing

It isn’t anything grand or elaborate but it IS finished! It’s an orange dishcloth, and I’ve added it to my Ravelry projects. 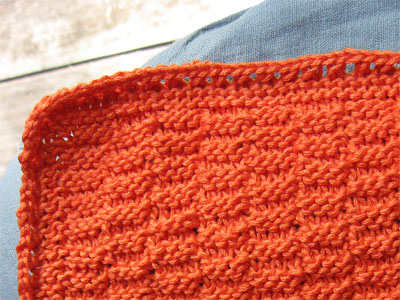